TOKYO — A record 11.5 trillion yen ($85.8 billion) left Japan in the January-March quarter amid a historically weak yen and rising commodities prices, while the latest data suggests the country could see even greater outflows in April-June.

Import prices rose 43.3% on the year during May in yen terms, according to the Bank of Japan. This outpaced the 26.3% increase on a contract currency basis and represented the largest jump since comparable data became available in 1981.

Meanwhile, export prices increased 16.7% in yen terms. Japan’s terms of trade — the ratio of export prices to import prices, serving as an indicator of a country’s purchasing power — hit a record low.

Japan’s real gross domestic product totaled 538.7 trillion yen in January-March on an annualized basis. But the figure was based on 2015 prices and did not reflect the decline in Japan’s terms of trade since then.

Gross domestic income, which does reflect terms of trade, came to 527.2 trillion yen. The gap of 11.5 trillion yen between the two figures represents the amount of income that flowed out of Japan during the quarter. 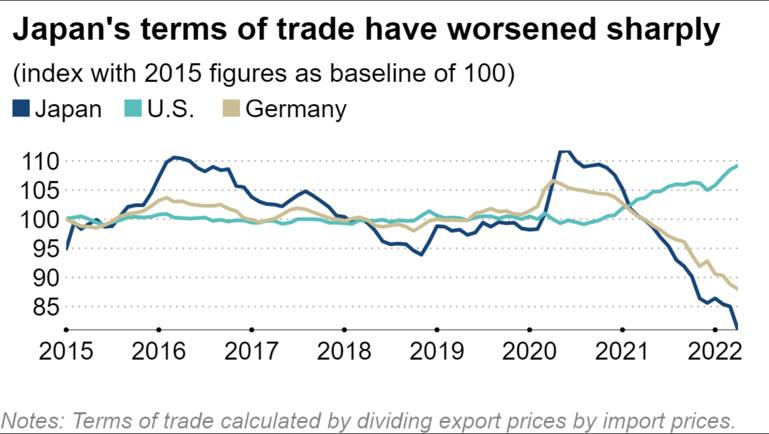 In contrast, the U.S., which exports crude oil and other commodities, improved its terms of trade. Germany, though a net importer of resources like Japan, has not suffered such a steep decline because its contracts are denominated mainly in euros.

The high resource prices and weak yen leave Japanese companies grappling with the rising costs of goods. The producer price index climbed 9.1% on the year in May, gaining by over 5% for the 11th straight month — a threshold not crossed since February 1981. Of the 515 goods that make up the index, 426 — or over 80% — increased in price.

With coal and iron ore growing more expensive, Nippon Steel raised its wholesale price for steel sheets by 20,000 yen, or around 15%, per ton for shipments starting in June. The company has now announced over 90,000 yen worth of price hikes since October 2020.

The trend is spreading to consumer products. More than 10,000 food items from 105 publicly traded companies are increasing in price this year, research company Teikoku Databank said. Though most hikes so far have stemmed from rising prices of cooking oil and wheat, more companies are factoring in crude oil prices and the weak yen as well. Calbee hiked prices on its potato chips due to higher costs for cooking oil and packaging materials.

“We have no choice but to raise prices, even if it means we sell less product,” said Masaru Ikemi, president and CEO of Maruha Nichiro. The seafood distributor is increasing prices for nearly all retail frozen items by 5% to 28% starting with shipments on Aug. 1, just six months after its first hike in three years in February.

“We’ve been working to improve our productivity, but we’re at our limit,” said Shuji Ito, Calbee’s president and CEO.

Japan has seen slower growth in nominal wages than the U.S. and Europe, meaning even a small price increase can deal a heavy blow to consumers. Households might cut back on spending as they lose purchasing power.

Why We Prefer Investing In Commodity Stocks Rather Than Direct Commodities