TOKYO — Japan’s dream of turning Tokyo into a new hub of international finance is fading, even as Hong Kong hedge funds scramble to find a new home in Asia.

Both the central government and Tokyo have been promoting the capital as the destination of choice for the large numbers of hedge funds fleeing Hong Kong. But Japan’s restrictive tax system — despite weak efforts at reform — is proving a huge disincentive.

“If the tax system and regulations in Japan are improved, we would move to Tokyo immediately,” an executive at a Hong Kong-based hedge fund said under condition of anonymity. “As it is now, however, it is hard for us to relocate to Tokyo.” His fund, which has become a major player in the Asian hedge fund sector, eventually gave up a long-discussed plan to move to Tokyo.

After the Hong Kong National Security Law came into force in June 2020, Hong Kong’s appeal as a global financial hub dimmed considerably. The city’s zero-COVID policy, which has severely diminished livability, is also prompting hedge funds to set up shop elsewhere. “The [Hong Kong] market has not been fully open in these two years or so, and my family is finding it a bit tough to live here,” said an executive at another fund.

Yet one of the executives said he has “never thought of Singapore as a relocation destination.” One of the reasons is the difficulty of living in Singapore, where prices are climbing fast. International schools in Singapore have seen an influx of enrollees from former Hong Kongers and are nearly at capacity. Some fund executives in Hong Kong noted also that investments focus on Japan and China, making a move to Singapore questionable owing to its distance from the two countries.

Tokyo would seem to be the most logical Asian destination. Besides political stability and good public security, Tokyo offers excellent educational resources for children, and thanks to the recent weakening of the yen, comparable prices to other major Asian cities as regards food, clothing and housing. But it is Japan’s complex and heavy tax system that is souring many hedge funds on Tokyo.

So-called preferential treatment in the government’s international financial center plan is virtually useless for most hedge funds. First is how executive compensation at fund management companies is calculated. The plan allows companies to count such compensation as a loss. But this is only available to unlisted, non-family companies, defined as those with three or fewer family members who hold more than half of shares combined. At many hedge funds, founders continue to own a majority of shares even several years after the start of the business. In some cases, a founder may own all the shares. 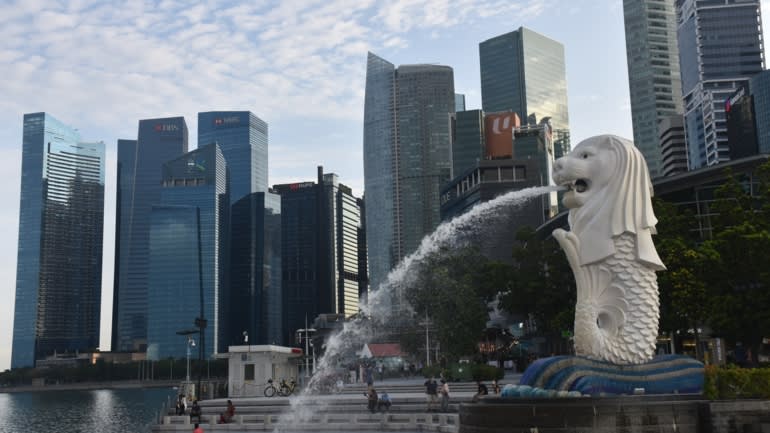 Another measure useless for many hedge funds is separate taxation on “carried interest” — profit received by individual fund managers who have invested and sold their holdings, with a tax rate of 20%. This incentive is primarily designed for private equity funds and venture capital funds that employ a partnership system, in which a special-purpose company (SPC) is set up for each investment project and individual fund managers invest in an SPC. Fund managers at hedge funds can hardly take advantage of this measure.

Almost all hedge funds, which frequently trade listed stocks, take the form of a joint-stock company. Therefore, contingency fees linked to investment performance — received by individual fund managers — are treated as salary income and subject to a consolidated income tax of up to 55%.

“The initial plan of the Financial Services Agency, which has spearheaded the international financial center initiative, was watered down by the Ministry of Finance and others, resulting in ‘preferential treatment’ no one would use,” lamented a government official. “Allowing only non-family companies to book executive compensation as a loss is a typical example.”

Moreover, Japan taxes capital gains — profit on the sale of securities — creating another disincentive. Capital gains are not taxed in Hong Kong and Singapore. “Even if we relocate to Tokyo and individual fund managers endure a significant income tax increase, we face a capital gain tax on proceeds from securities sold by funds,” noted one of the aforementioned executives in Hong Kong. “As long as this difference in taxation exists between Japan and Hong Kong, Singapore or anywhere else, our overseas investors will not allow us to move to Japan,” he said.

If this situation continues, the Japanese stock market could possibly lose Japanese share trades to other Asian markets. The Tokyo Stock Exchange category of “Investments in Listed Stocks by Nonresidential Investors” showed that the proportion of trading by Asian investors recently rose to 18%. Trading by European investors, including those in London, remained at about 70%. But Asian investors, largely based in Hong Kong and Singapore, overwhelmed North American investors (7%), though the proportions of trades by both groups had been nearly equal until recently. Asia-based investors are now the second-most active group after European investors in the Tokyo stock market. 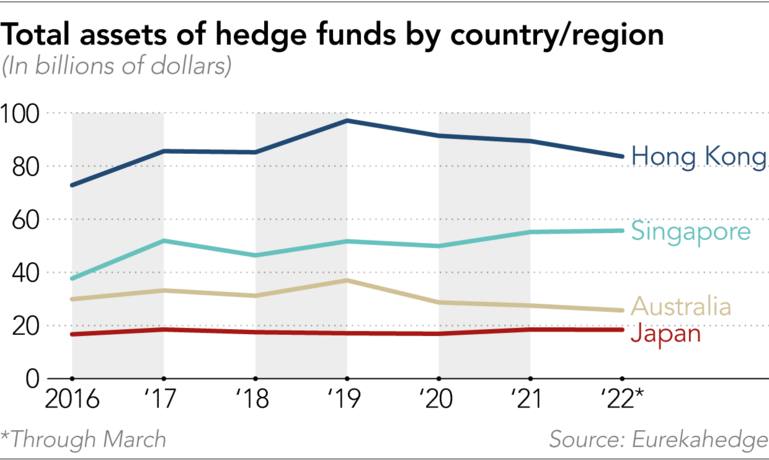 The main players among these Asian investors are hedge funds in Hong Kong and Singapore. Like these hedge funds, which pay a huge amount in fees, many Western financial institutions have transferred the function of researching Japanese stocks from Tokyo to Hong Kong or Singapore in recent years.

Currently, a large portion of Japanese stock trading originates outside Japan. Residents in Japan sometimes cannot understand the mechanism and reason behind a movement in the Japanese stock market. The global financial hub plan should have reinvigorated the domestic market.

Looking at the Global Financial Centers Index — the only barometer showing the status of a city as an international financial center — Tokyo’s rank fell to ninth in the September 2021 survey and remains there. Tokyo was overtaken by Shanghai (fourth in the March 2022 survey) and Beijing (eighth). Tokyo’s long-held position of third among Asian cities is now a thing of the past. Furthermore, Shenzhen (tenth) and Seoul (twelfth) are closing in on Tokyo.

It is obvious that Japan must tackle its onerous tax system on hedge funds. “Japan has a perfect opportunity now. It’s a shame to miss it,” overseas hedge fund officials say.

Is now the right time for alternatives?

A Gateway to the Single Family Office Community